Our management represents our essence.

Focused on building prosperous relationships within their own staffs and other internal and external stakeholders, our executive team focuses on the goal of promoting a stimulating environment for the development of other high-performance teams.

PEOPLE, STRATEGY AND MANAGEMENT BOARD

PAPER AND FORESTRY BUSINESSES BOARD

ADMINISTRATIVE, FINANCE AND IR BOARD


He earned a bachelor’s degree in Agronomy from the Federal University of Rio Grande do Sul and completed the Owner President Management Program at Harvard Business School. INSEAD-IEL-NC Strategic Management for Business Leaders Programme, Fontainebleau – France; Industrial Marketing Management, from the School of Industrial Marketing; and Trendsinnovation Advisor in the INOVA BUSINESS SCHOOL Trendsinnovation Advisor Program. He is a member of YPO-Young Presidents’Organization since 2003. He joined the Habitasul Group in 1995, representing the Controlling Shareholder in the Statutory Executive Board of Irani Papel e Embalagem S.A. On January 15, 1999, he joined the management team of Irani Papel e Embalagem S.A., having held several important positions. He was appointed Superintendent Director on April 29, 2002, and later served as Chief Executive Officer from May 2, 2013 to July 2017. He has been a member of the Companhia Habitasul de Participações’ Board of Directors since april 1997 and took office as Chair of the Board of Directors on July 19, 2017. He is also the Chair of the Board of Directors of the Company’s subsidiaries, Habitasul Desenvolvimentos Imobiliários S.A., Hotel Laje de Pedra S.A., H G E – Geração de Energia Sustentável S.A and Irani Participações S.A. From June 2017 to April 2019, he was the Chief Executive Officer of Companhia Habitasul de Participações. Also working as Chair of the Board of Directors of the wholly owned subsidiary Habitasul Florestal S.A.


He earned a bachelor’s degree in Mechanical Engineering and specialization degrees in Marketing (Kellogg School of Management – Northwestern University – EEUU) and General Management (INSEAD-France). He was the Chief Executive Officer of Kepler Weber S.A., Condor S.A. and Medabil S.A., as well as Vice Chief Executive Officer of Rigesa Ltda. He was a member of the Board of Directors of several companies and is currently a member of the Board of Directors of Companhia Habitasul de Participações, Irani Papel e Embalagem S.A., Lwart Participações e Empreendimentos Ltda., Kemin South America, Alliage S.A. and GG Participações S.A. He is a member of YPO, the Industrial Marketing Institute and the Future Advisory Board, as well as the Coordinator of the TrendsInnovation Advisor Program of INOVA BUSINESS SCHOOL.


He earned a bachelor’s degree in Law from the Federal University of Rio Grande do Sul and an MBA in Economic and Business Law from Fundação Getúlio Vargas. He also completed a professional master’s degree in Economic and Business Law from Universidade do Vale do Rio dos Sinos – Unisinos. He was a Board member certified by the Brazilian Institute of Corporate Governance – IBGC and an Alternate Board Member at CIBRASEC – Companhia Brasileira de Securitização. He is a partner of LOF Consultoria Imobiliária Ltda., and a member of the Board of Directors of Companhia Habitasul de Participações and Irani Papel e Embalagem S.A.


He is independent member of the Board of Directors of the Company. He is an Entrepreneur, Business Administrator, Mediator, Lecturer and Consultant in Corporate Governance. He earned a bachelor’s degree in Business Administration from EAESP – FGV in 1972 and specialization degrees in Advanced Management from Fundação Dom Cabral and INSEAD – Fontainebleau – France 1991; Entrepreneurship from Babson College – Boston – U.S.A. in 2004; Corporate Governance – Corporate Governance Board Leadership; and TOT – Training of Trainers from IFC – IBGC in 2009, 2011, 2013 and 2016. He was a co-founder of the Brazilian Institute of Corporate Governance (IBGC) in 1995 and continues to work on several of its committees. He has been a Board member certified by the IBGC since 2013. He a member of the Board of Directors of several companies and non-profit organizations. He is an associate member of the Brazilian Institute of Financial Executives (IBEF) and the Family Business Network (FBN). For 20 years, he was an Executive Officer, shareholder and member of the Board of Directors of Metal Leve S.A.; the Chair of the Brazilian Securities and Exchange Commission (CVM) in 1992, being responsible for the pioneering launch of Aracruz ADRs on the New York Stock Exchange. Between 2002 and 2007, he was the Coordinator of the Shareholder Development Partnership (PDA) of the Center for Family Businesses of Fundação Dom Cabral (FDC). He is a Co-author of the book “A Dimensão Humana da Governaça Corporativa” (The Human Dimension of Corporate Governance) by Herbert Steinberg (Ed. Gente, 2003) and wrote several articles for magazines and newspaper. He was the Coordinator and Co-author of “Caderno de Boas Práticas de Governança Corporativa para Empresas de Capital Fechado” (Booklet of Good Corporate Governance Practices for Privately Held Companies) published by the IBGC in December 2014 in SP and in January 2015 in Lisbon, Portugal. He is also Co-author of the IBGC booklet “O Papel do Conselho na Estratégia das Organizações” (The Role of the Board of Directors in the Strategy of Organizations), published in November 2017.


He earned a bachelor’s degree in Business Administration from the State University of Ponta Grossa, an MBA from Boston University – Questrom School of Management, an Executive MBA from the University of São Paulo and a graduate degree in Public Administration from Fundação Getúlio Vargas (EBAP/FGV). Previously, he worked in strategic consulting at Roland Berger Strategy Consultants and the financial sector at Banco do Brasil. He has been working in the sector since 2004, when he joined Irani as Marketing and Sales Officer, a position he held for six years. He held the positions of Paper and Packaging Business Officer and Chief Operating Officer for seven years. In July 2017, he was appointed Chief Executive Officer of Irani Papel e Embalagem S.A. Sérgio has also been the Chief Executive Officer of the Habitasul Group, Irani’s parent company, since 2019.


He earned a bachelor’s degree in Accounting, a graduate degree in Finance from UNOESC – Universidade do Oeste de Santa Catarina, an MBA in Business Management from Fundação Getúlio Vargas (FGV) and a professional master’s degree from the School of Business Administration of UFRGS, Porto Alegre.
In 2002, he joined Irani, where he held the positions of Supervisor and Controllership Manager for more than 10 years. He took office as Strategy and Management Superintendent in 2014 and was appointed People, Strategy and Management Officer in 2017. He has also held the same position at the Habitasul Group, Irani’s parent company, since April 30, 2019.


He earned a bachelor’s degree in Business Administration with emphasis on Foreign Trade from Mackenzie University (SP) and an MBA in Sales Management from ESPM (SP). Previously, he worked in the Export area of Igaras Papéis e Embalagens and as a Business Consultant at Grade Assessorial Comercial Ltda. He joined Irani in 2003 as Head of Exports, became the Export Sales Manager in 2004 and started working on Domestic Paper Sales in 2009. In December 2016, he took office as Executive Sales Manager – Paper and Forestry and, in December, 2017, he was appointed the Paper and Forestry Business Officer of Irani Papel e Embalagem S.A.


He earned a bachelor’s degree in Business Administration and an MBA in Commercial Marketing with emphasis on Sales from Fundação Getúlio Vargas (FGV-SP). Previously, he worked as a Packaging Technician at Orsa Fábrica de Papelão Ondulado S.A. He joined Irani in 1998 as a Packaging Technician from July 2006 to September 2013, worked as a Commercial Manager from July 2006 to September 2013 and took office as Sales Superintendent in October 2013. In December 2017, he was appointed Packaging Business Officer at Irani Papel e Embalagem S.A.


He earned degrees in Accounting and Law and a graduate degree in Managerial Accounting, Costs and Controllership from UNOESC – Universidade do Oeste de Santa Catarina. He has worked in the sector since 1995 when he joined Irani Papel e Embalagem S.A. He began his journey in the Accounting area, served as a controller and worked on expansion projects. Since 2004, he has been the Chief Administrative, Financial and Investor Relations Officer. In July 2017, he was appointed to the same position at the Habitasul Group, Irani’s parent company. In 2019, he was elected the Finance Executive of the Year and won the “O Equilibrista” award of the Brazilian Institute of Finance Executives (IBEF) of RS.

PEOPLE, STRATEGY AND MANAGEMENT BOARD

PAPER AND FORESTRY BUSINESSES BOARD

ADMINISTRATIVE, FINANCE AND IR BOARD 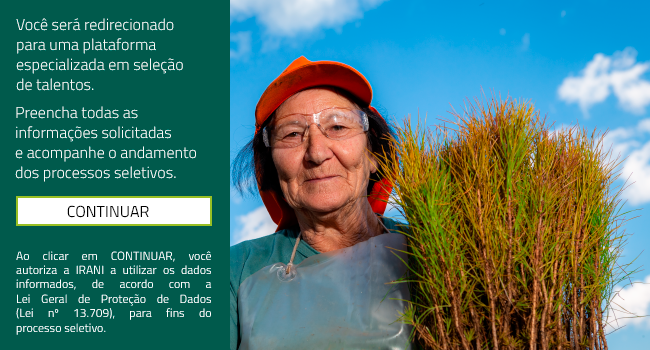